Yes, These are Real

What will the world think of next?

Bite His Head Off. It’s Okay.

But really? These are a sad commentary on society. A very sad commentary. What kind of monsters are we, baking cookies in the shapes of our friends and neighbors (minus the hair and any distinguishing features) only so we can systematically and methodologically bite off their arms, legs, and their heads? We are a terrible species and we deserve nothing but whatever awful things are due to us.

But hey, at least we’ll have cookies, so it all evens ou tin the end. Right?

Rest assured, this is a gag gift.

$10 or so, plus shipping. Antacids not included.

Dashing and daring,
Courageous and caring,
Faithful and friendly,
With stories to share.
All through the forest,
They sing out in chorus,
Marching along,
As their song fills the air.
Gummi Bears!!
Bouncing here and there and everywhere.
High adventure that’s beyond compare.
They are the Gummi Bears.

Now, in your ice cube tray. Except for that one in the bottom right. He bounced off somewhere. Probably into someone’s mouth, because he’s tasty.

Here are the top 7 reasons why 7 pounds of candy — meh candy, too, given that “strawberry” thing in the picture — is the best-ever Secret Santa gift.

1) It’s low-risk. The worst part about Secret Santa is having to pretend to like what your Santa got you. This won’t help, but it will help with the second-worst problem: when your giftee makes that “wtf” face upon seeing your gift. This is guaranteed to get the “wow, this is SO MUCH CANDY” reaction — even if the person hates candy. Problem averted.

2) There’s so much candy, your giftee will have to share. That will make him or her instantly popular, and therefore, appreciative of the gift.

3) There’s so much candy, your giftee will have to share. That will make you instantly popular, and that’s good.

4) It doubles as a science experiment or betting opportunity. Try to predict which candy type will be left over after the good ones are picked through — and, perhaps, start a betting pool around it.

5) The high likelihood of it being opened within a few minutes after the festivities ends means that there’s a low chance of it being regifted. Which is good because no one likes to see their gift from last year make it back into the gift pool next year. No one, Mr. Williams, no one.

7) There’s so much candy, your giftee will have to share — with you! You’re basically buying a gift for yourself.  (Don’t worry, it’ll be our little secret.)

Take two cookies. And some ice cream. Let’s face it, you’re already 95% on the way to being awesome.

But that last five percent, that’s always the trick, isn’t it?

Not any more. Not by a long shot.

Dave likes lunch. So much so, in fact, that he eats his it every day at about 11:30 — but, “accidentally,” eats someone else’s sandwich instead. And no one wants that anchovy, jalapeno, and mayo monstrosity that he brings from home, no sir. Definitely not you. You wanted that really awesome BLT you picked up on the way to work. But no, no… Dave ate it.

Hopefully, Dave will get let go in the next round of layoffs. Or arrested. Or come down with mono or something. But until then, use the anti-theft lunch bag. Make Dave think that your egg and cheese on whole wheat comes with a generous side of toxic mold.

It’ll be our little secret.

It’s called “Awesome Sauce.” It could taste like pigeon poop and you know what? It’d still be worth a try. Seriously, take a bologna-on-Wonder Bread sandwich — the non-awesomest thing you can possibly eat — and bam! add the awesome sauce to it. Then it’s a meal. Potentially a really bad tasting one, but who cares? Be a man. Lightsaber chopsticks. When you first ate sushi, you were but the learner. Now you are the master. (Only the master of eel, Darth?)

May the Force be with you, and the forks left alone. Miraculin, the magic ingredient in “Miracle Frooties,” tricks your tastebuds into thinking that sour stuff is sweet. Pop a Miracle Frooties tablet in your mouth, let it dissolve, and then bite into a lemon — it’s like eating candy!

Fact: Everyone likes marshmallows. Everybody. Even the Stay Puft Marshallow Man would eat a marshmallow, because they’re that good. Sugar and squishy and kind of gets stuck in your teeth… what’s not to like?

Fact 2: Everyone likes chocolate. Even dogs, and they’re deathly allergic to the stuff.

This ice tray only makes six ice cubes, but it makes SUPER GINORMOUS ones. They’re so big, we need capital letters there, and really, even that’s inadequate. You could probably freeze a whole Oompa-Loompa, they’re so big. But probably not Augustus Gloop. 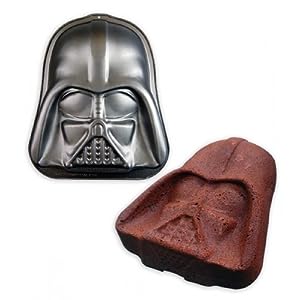 Ever wanted to Force Choke someone to death? Just use the above to make Aunt Myrtle’s fruitcake.